Around 5 am I got a really hard charlie horse (muscle cramp) in my calf and foot, so I jumped out of bed to press my foot hard into the floor to relieve the spasm. As it started to get better I started to feel light headed and I needed to go to the bathroom. The next thing I knew my head hit the tile floor, hard. Ow, I thought.   John said that woke him up. He knelt over me (I was completely laid out, face down, on the tile and small rug) calling out my name and touching me. I was sweaty. After a couple minutes I moaned a few times, then he said (I heard this) “you have blood coming out of your mouth.” I pulled my hand across and sure enough, it was bloody, as was the rug under me. Scary. I still needed to go to the bathroom, so I slowly got up and made it to the toilet. Unfortunately, I’d left a lot of wet on the floor when I fell too. Weird. We figured out the blood was from my cutting my lip. It was like when you slice a radish on 4 sides, to make petals. I now have a red fang on my upper lip.

Once I climbed back into bed, I felt so calm, tired and sore in my head, neck and upper back. I don’t think I fell asleep, but I did find a comfortable position eventually and relished lying there.

After 8 am I managed to get up, get some orange juice and egg (thanks, cook John) and an Aleve. The weather is looking good, not raining at least, so we’ll go on our Trace trip today. 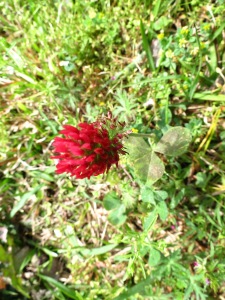 As we got going on the Trace, we saw a coyote and later a turkey cross the road. We also saw lots of crimson clover. Lovely against the green of grass. Never saw this plant until the South.

Some farming is still happening along the Trace. I think this may be rape seed (canola)

John has figured out that we get better gas mileage in both our vehicles when they’re on the Trace: 33 and 34 for the CRV and 9.2 for the RV. By the way, we found out it took 67 years to build this Parkway!

Jeff Busby Park is the farthest south of the sites we stopped at. This is where we could have camped, but weren’t sure we’d find a spot. There are only about 11 slots, they are not all that level, most are half loops. It was pretty full today. So, if you’re in a smaller rig you could feel more sure of a place. You can a great view from the hill above the campsite area. 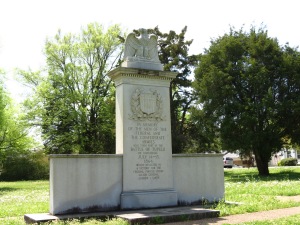 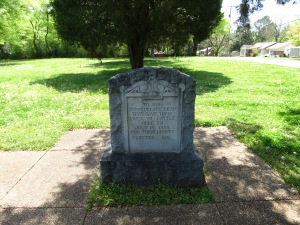 Tupelo National Battlefield. We thought it would be larger, but it was just a corner off of the street. 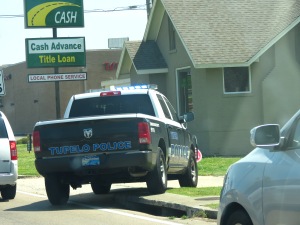 As we were waiting for a train to go by in Tupelo, we noticed a police TRUCK next to us, with its lights on. Suddenly, it pulled off the road. 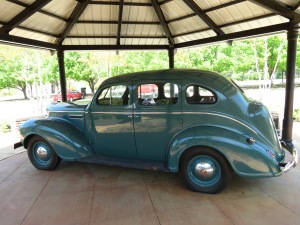 At Elvis Presley’s Birthplace, in Tupelo: The same year Buick his family took when they left Tupelo for Memphis.

The 2 room home Elvis was born in. His father built it. There was electricity available for their street, but their house didn’t have any because they couldn’t afford it. Unfortunately he also couldn’t afford the payments for the land and forged a check. For that he was sent to prison for 3 years and served 8 months. When he got out, they lost the house to foreclosure. It was rented out then, for 19 years. Elvis bought it in 1957. It was renovated to its original condition in 1969, 1970. The Fireplace is the most completely original part of the home. 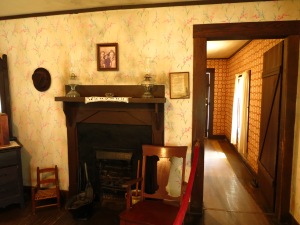 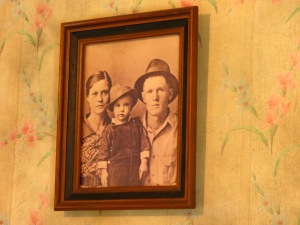 The young family listened to a radio that operated on a car battery, so they could only use it once or twice a week. 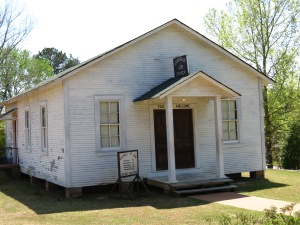 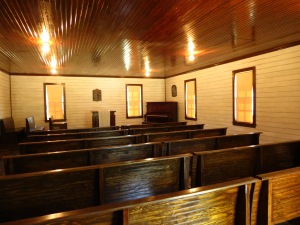 Assembly of God church that the Presley family attended. Elvis first sang “specials” there in 1944. The pastor enjoyed giving guitar lessons to Elvis. Apparently, while at the store, Elvis had wanted a rifle but Gladys (his mother) didn’t want him to have it, so she suggested a guitar and won the battle of his desires.

A sculpture of Elvis at 13, the year his family moved from Tupelo to Memphis.

We left Tupelo for the Natchez Trace Parkway Visitor Center, where we learned more about the Trace: Back in 1905 people were placing markers along the Trace to commemorate the special events that happened along its path. It came under the National Park Service in 1934. The last piece was in place in 2005. “The Natchez Trace Parkway is not a highway but a long, narrow Park.”

Then we took our long, over 2 hour drive home. Dinner was left over roast. While I washed dishes John went to the store. He brought home a treat that I wasn’t expecting: Blue Bell Ice Cream, for my sore lip. So sweet.

I've always loved the loose, flowing, transparent look of watercolors, of Chinese paintings and their calligraphy, but alas, no watercolor classes were available when I was in school, so that interest remained buried until my children were grown. Even then, I was afraid that I couldn't really paint, so upon my sister's advice, I actually started to take classes. I signed up for every class available, determined to learn no matter how afraid I was. I came upon a teacher, Stan Miller, who inspired me, who opened the door to success in watercolor. I love to look at beautiful images. I want to capture them forever. All my life, photography was how I gathered images of the beauty I saw. Thanks to all that photography, I enjoy composing pictures, especially up close. Watercolors allow me to add more of me in their translation of that beauty. My paintings reflect my love for music and dance, with their rhythm and flow. I am fascinated by the play of light, so it appears in my pictures as drama for they are filled with darks and lights. Maybe it's the challenge, maybe it's the beauty, but now, when a work comes together, it fills my soul.
View all posts by Patricia Elser →
This entry was posted in Mississippi, National Parks (NPS) and tagged Elvis Presley's Birthplace, Jeff Busby Park, Natchez Trace Parkway, Natchez Trace Parkway Visitor Center, Tupelo MS, Tupelo National Battlefield. Bookmark the permalink.